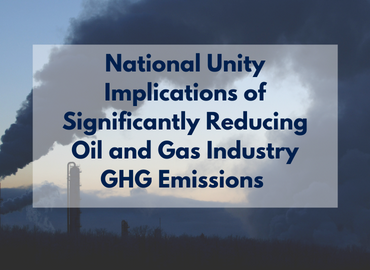 Climate Talk Canada’s report National Unity Implications of Significantly Reducing Oil and Gas Industry GHG Emissions addresses the problem of possible conflict between the oil provinces and others as the federal government moves to reduce oil and gas emissions. The report recommends that the Minister of Environment and Climate Change, and an Advisory Body establish a citizens’ forum made up of individual Canadians from the fossil-fuel and other provinces. With a requirement to report by April 1, 2022, the mandate of the forum would be to answer this question: How can the necessary oil and gas industry emission reductions be achieved in a way which is seen as fair and equitable by all Canadians?

Climate Talk Canada consists of climate policy professionals located in all regions of Canada working in academe, business, and law. The group meets electronically each month to engage in cross regional discussion of one of the major challenges facing Canadian climate change mitigation policy – the fact that greenhouse gas emission increases in the oil and gas producing provinces of British Columbia, Alberta, Saskatchewan and Newfoundland, and Labrador are overwhelming reductions made elsewhere and so contributing to Canada’s inability to reduce total emissions. Because it is the largest emitter in that group, the focus is upon relations between Alberta and the rest of Canada. The group exists to facilitate pan-Canadian conversation on how this country can broker agreement among regions to finally begin to reduce its total emissions.